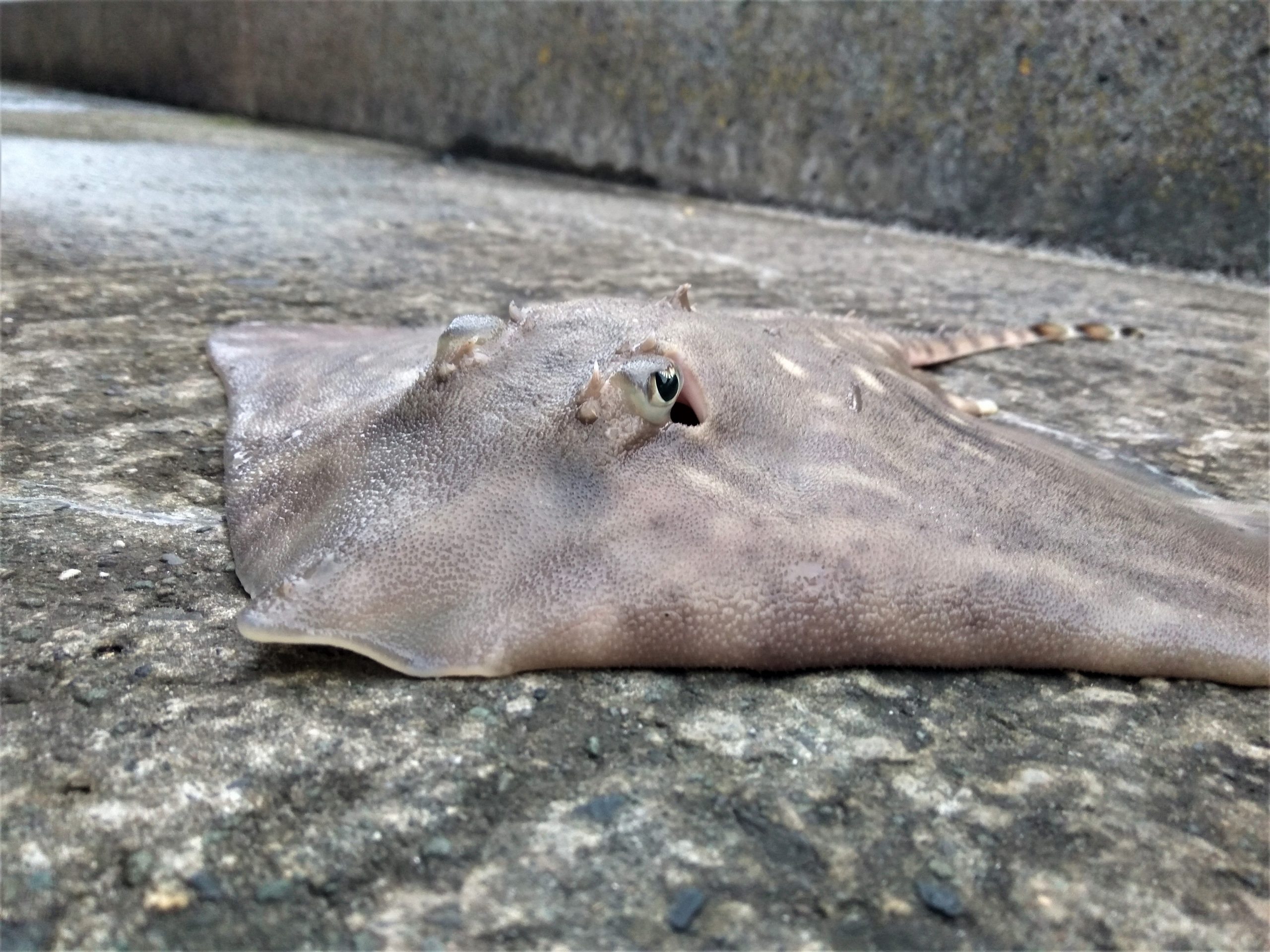 Tralee bay is a renowned spot for targeting multiple species of Ray. Stingers, Painted, Undulates and Thornies are all taken from the shore on a regular basis and some anglers trying to get all 4 species in 24 hours, now that would be an achievement. With the water temperatures down and not many reports of Ray being taken from the shore, my hopes were not very high but still I was going to try. The plan was to head to Fenit after work and try to get a Thornie and an Undulate. When I arrived at Fenit the wind was southern blowing like crazy with rain showers. Fishing two rods, one was scratching for species and the other fishing for Ray.

It wasn’t long before I had my first fish. A small 3 beard Rockling had taken a small belly strip of mackerel close to the bridge Soon after a small Whiting fell to a piece of lug at range. Fenit Pier is one of those places that throws up a plethora of species and if you ever have the chance to get to Fenit bring some fishing gear.

After a bit of time the Ray rod had a bit of a tap , not much of one but easily distinguishable from the lead bouncing on the bottom. As I waited to see if the fish was still there or after turning its nose up at the bait the rod went again. This time it wasn’t a Whiting or a Rockling. There was a bit of weight but not a whole lot. I thought maybe it was a lazy dogfish as there was little to be felt through the line. About 40 yards out I see one of my target species skating across the surface as it was winched in.

A small little Thornie decided to grace me with its presence. It took half a large Sandeel. With a quick unhooking and a quick photo she was swiftly released again. Happy with one of the species out of the way I was quick to get another Sandeel on and out again.

It wasn’t long before the rod went again. This time I knew instantly that it wasn’t a a dogfish. Now I had realised I had forgotten something. The drop net. No where to be seen as I was trying to get the Ray in. Now if you have ever fished Fenit you will know the difficulty of landing fish in the current as the bridge supports are covered in razor sharp mussels and fish seem to know to swim straight for it. As the Ray came in I could see that it was a decent sized Undulate and a male, Great. I always find the males to be the worst for heading straight under the bridge but I was hopeful. Trying to balance the zippy on my shoulder with the line tight I managed to hand line the beauty up the side and safely unhooked and measure him. These are amazing looking Ray with there markings and they put up a good fight compared to some of their cousins. Happily measured and photo taken he was released back into the Bay.

As the Sun began to set and the fishing slowed to a halt I made the decision to and head back home. and get some gear ready for tomorrows session. I planned on meeting Emmett for some fishing on Banna strand so I needed sort some gear and bait.

After arriving on Banna strand in the sweltering heat, for the first time in a while, Emmett wanted to target Turbot while I was looking at targeting Painteds.

There was a nice swell of 4 foot and the water was very clear so I didn’t expect a ray so I decided to target some bass and flats. Emmett had firmly set his sights on Turbot only.

Fishing was very poor and resulted in a single teabag Turbot for myself and nothing for Emmett. With the fishing so poor we decided to head back to Fenit and try get some more Undulates and Thornies.

After a few hours at Fenit and very little happening except for the usual dogs Emmett hooked into a decent Undulate who fell to a whole Sandeel. Thankfully we had a drop net this time and with a bit of maneuvering got it in the net. A great catch and pick-me-up from the failure of turbot.

With the temperatures starting to climb it wont be long before all the species of Ray are taken in the bay and with Tralee Bay Tag-a-Ray competition starting on the 26 of May lets hope for some great weather.