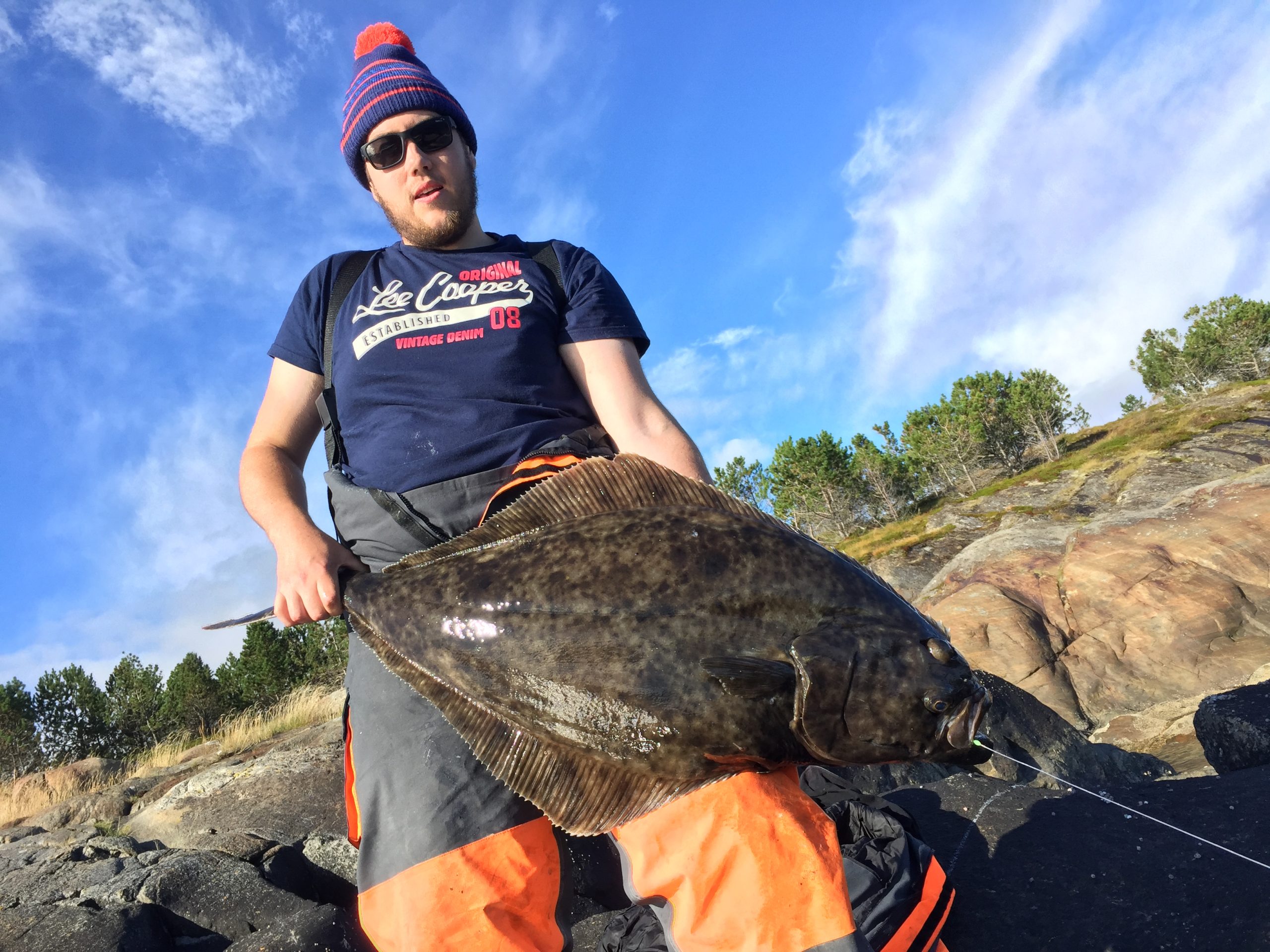 The Following day we make phone calls to Widero for updates to bags, no sign of them. So we tried to find a few marks and try fishing the pier behind the house. We were told of some great Dab fishing and the chance of a Halibut. This mark became our local haunt. It was incredibly  convenient, 30 second walk (not that we ever walked to it)  from house, couldn’t be better.  With the weather so nice we stayed here for a few hours trying to see what species we could get with our limited gear. We all chopped and changed between the heavy gear and light gear trying different techniques.  As you would expect from Norway and its cold water we were plagued by Coalies. They are everywhere great fun on the light gear but they make for handy bait when the fish plant, where you get bait, was closed. We also caught some Mackerel, Dab and Cod here.

Getting a bit tired and sick of all the Coalies we head for a bit of grub and off to another mark. The only information that we were sure was correct from talking to locals is that the Halibut in the summer months come into shallow, well less then 30 meters, sandy , fast moving water feeding on peelers. The mark we decided on had all of this.

We arrived at a pier that was less then ideal but worth a try and certainly deserved a good session once our gear arrived. We plugged away here trying for anything but it wasn’t to be. After a few hours here with sun setting we start to pack up and call it a day. Then the phone rang. It could only be one thing. They said they had 7 of the bags but couldnt give us much detail as to what bags. They said that they were on the ferry and will be with us in the next hour. Well you have never seen people leave a mark to get home as fast as us. It was like Santy was waiting at the door. We got home made some dinner and waited to see the lights of the taxi pull into the driveway.

We waited and waited until we saw it. The taxi. It arrived into the the car park and I was out the door excited to see all my gear. Unloading the taxi I couldn’t contain my excitement.

All the rods arrived, all the reels and everyone’s clothes …..except mine. They lost my bag with all my lures, rigs, boots and wet gear but I had all my rods, reels and my carry on which had t-shirts, jumpers and pants. I was happy with this, well as happy as you could be what was happening. We sat at home for the night unpacking gear.

The fight was now on. We had 4 days fishing left and we swore to fish hard and hard we did. Up early we headed to the mark we finished with the night before.

The weather wasn’t the best and with myself having no wet gear I was lucky the accommodation had gear that people had left behind. We planned on fishing further up the channel then the last night so that we could take full advantage of the current pushing through. Alan and Ian took one point and myself and Charlie took the other.

Charlie took one decent 6lb Cod when Ian and Alan decided to join us as their mark was too snaggy. With a few more cod taken we started to grow tired of the mark until Ian’s rod had a few decent taps. As he struck in nothing, just snagged in weed or so we thought. He pumped it in until it was at his feet but still really deep and then he stopped. “I think I have a fish”, he thought he had felt a head shake. Now I don’t claim to be an expert but this piece of “weed” with a little fish shouldn’t be able to do what happened next. Ian was using a zzippy m4 evo with a Diawa Saltist HSH 30, both quite significant pieces of gear. This fish thought nothing of them. This fish took off realising it was hooked. It went against the current like a steam train. It was a Halibut. There was nothing he could do to stop it. It stripped about 70-100 yards of line and stopped. He reeled down and nothing, didn’t budge. Tried again got about a few turns of the reel and off it went again. Then snap. Gone. All over. The Halibut had gotten too close to the rocks and snapped the mainline. We were all gutted for Ian.  This gave us some new life and we stayed here for another 3 hours but nothing except Cod were taken. With Ian still shaking after his encounter we head home.

The next day myself and Ian woke up early to get some bait and head off on our own. We fished the pier behind the house for a hour to get some mackerel for bait and after getting 4/5 we head to the “Fish Farm” mark. This mark just seemed to have potential. We set our sights on Halibut and that was it. Big baits and distance was all we were going for. We were getting the usual Cod and Coalies on Spinning gear so we were having some fun.

About 2 hours into this my rod a knock. “A Cod again”, I said. Nope! Picked up the rod , reeled down and the fight was on. This was not a Cod. It Could only be a halibut. It went on 3 or 4 good runs taking about 30/40 yards of line each run. My adrenaline was pumping and I could not lose this fish. I kept calm, and didn’t push the fish . I kept pressure on the fish and when I could regained line. Finally I could see my leader knot.  Ian guided the line into a crack in the rock and slid the Halibut up and out of the water. We did it. I couldn’t believe it we actually managed to do it.

The fish was landed, measured, photos taken and released. The hook was sitting right in the corner of the mouth and fell out when we were measuring it. This was the first Halibut myself or Ian had ever seen in person. What a beast. Overjoyed with what happened we immediately called Alan and Charlie and retold our story. With our hands still shaking we packed up and headed home for breakfast. We still couldnt believe what we had done and I could not sing Ians praises for landing the fish ( I still owe him a pint for that).

After that mornings high we decided to head out on the boat and see if we could get some big Cod and possible Halibut. The rental of the boat was part of the accommodation so it was perfect. Alan was the captain for the day. Now if you have never seen Vega archipelago it is insane. There are 6500 islands, islets and skerries. Trying to navigate this are is crazy. Lucky enough for us, Alan was up for the challenge. We picked a few spots that looked interesting . We spent the rest of the evening moving from spot to spot catching a few Cod, Mackerel, hundreds of small Coalies and to our surprise Ian pulled up a red fish. With light fading we had to give up and head in for dinner

We all decided to head back to where I had caught the Halibut the previous day and try again.

After a few hours of losing gear on the underwater ledges Alan decided to call it a day and head back and take it easy fishing from the pier behind the house. Myself Ian and Charlie stayed here for a few hours, Fishing was very slow and we only got a few Cod but nothing fantastic. Alan was having much better success fishing the pier getting some very nice whiting and Dab. We decided to call it a day and head back to the house. We had to start packing to head home. Our trip had come to an end. We fished as best we could and had high hopes for returning. As i write this we have just booked 10 days in August 2019 to return and fish it hard again. Lets all hope it goes to plan.

Also just a side not. On our way home we got stuck in Trondheim for 6 extra hours as the plane had a puncture, we missed out connecting flight in Amsterdam but KLM paid for a lovely room each in the Hilton Hotel and myself Ian and Alan had a eventful night in Amsterdam.